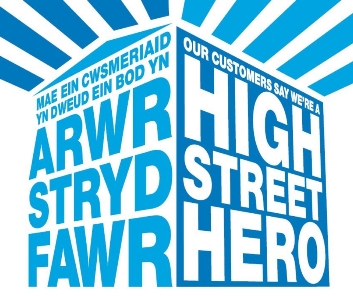 Hero of the High Street Award

This fantastic award shows how much our customers appreciate our knowledge, expertise and customer service. Recipients of this award were recommended by their customers and here at Classic Canine Cuts, we would like to thank our customers for their continued support and for recommending us for this award. 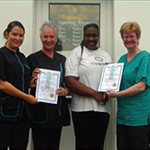 Coleen Smith and Lesley Taylor, an ex-pat living in France took part in the course at Blackwood-based Classic Canine Cuts.

Owner Claire Hyde said: “I am delighted and flattered people are prepared to travel so far for our courses.”

A SOUTH WALES dog grooming business has been praised for its positive attitude towards the elderly.

As part of the Government’s Age Positive campaign champions are organisations and individuals have successfully tackled or are committed to tackling the issue of age discrimination in the workplace.

Winners also have to demonstrate that they are taking practical steps to change their employment practices.

Owner of the business Clare Hyde said, “I have found that the older age categories tend to deal better with issues such as dog bereavement and be more patient with the dogs.

” I have and always support the objectives of campaigns such as Age Positive as I feel that they are fair and offer individuals opportunities based on ability, aptitude and skills as opposed to their age.

“My own business has definitely profited from such a mind set.”

Age Positive is a Government campaign seeking to tackle age discrimination in the workplace.

More than 75 UK companies, including Marks & Spencer, Asda and B&Q are already helping Age Positive to promote the benefits of age diversity.

The campaign aims to raise awareness of the UK’s changing demographics which by 2010 will see 40% of the working population being aged 45 and over.

THE first school in Wales for would-be dog groomers has been set up in Blackwood.

The idea of former Gwent police officer Claire Hyde, the venture is aimed at people looking to set up their own dog-grooming businesses.

The school is based at Ms Hyde’s Classic Canine Cuts business, which opened in February last year, and aims to cater for up to 21 trainees a year.

Ms Hyde said, “The training courses are aimed at people looking to set up their own dog grooming businesses.

“Interest to date has been very positive.”

Ms Hyde, who spent 13 years in the police as a trainer specialising in law, added, “We have built up a customer base of around 1,000 with people coming from all over South Wales with their dogs.”

Support has come in the form of a Welsh Assembly Investment Grant and a startup grant from Caerphilly County Borough Council.

Ms Hyde said, “The economic department of the authority have been fantastic in their support.” 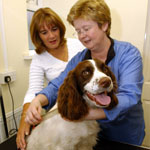 The first commercial dog grooming school in Wales has been set up in Blackwood Town Centre with help from Caerphilly county borough council.

Claire Hyde, of Classic Canine Cuts, has expanded her successful grooming business by offering training courses to people who are interested in a career in commercial dog grooming.

The courses on offer range from 6 weeks to 3 months and participants will learn everything they need to know about bathing, clipping and grooming various breeds of dogs incorporating safety throughout. The trainees work on dogs whose owners have given permission in return for a reduced rate and there is even a residential option for trainees who would prefer to stay on-site during their course.

The business recently won the New Business of the Year award at the annual Caerphilly Business Forum awards. Caerphilly county borough council provided Claire with a Business Grant to get the venture off the ground and purchase special adjustable hydraulic tables for the trainees to work on.

Claire Hyde is delighted with the success of the business, “Business is brisk and bookings for grooming courses are being received. Trainees are very enthusiastic and keen to learn these exciting new skills. I’d like to thank the council for all their help and support over the last year to help get the business up and running.”

Cabinet Member, Cllr Robert Gough said, “The council offers a range of grants to local businesses and we are always delighted to be able to help new ventures get off the ground. I would like to congratulate Claire on her success and hope the business will continue to prosper in the future”